The earth was my home and the planet too. I was living in the earth. It was the only planet where human beings lived. I was a small astronaut who used to work in a big building named “The Blue Planet”. I was like the other astronauts but some were senior to me and some were junior. At that time nobody was my friend because I was a big failure who was never happy. Nobody would talk with me. I was alone in the whole world.

One day while I was coming towards the office, a man asked me, “Are you a man?” I got very angry and replied, “Yes, I am a man because I have a brain like you.” The man went without telling anything.

After some hours, in the office a news came and I hurried to hear the news. After some minutes, the boss came and told me that a new planet named Sulfrin was found. I was surprised listening to the news. Many astronauts were discussing about going to the new planet. I was also thinking to go. I decided to talk with my boss about the topic and I went to his office for the proposal. When I presented the proposal, the boss said, “Are you mad to think of such a dangerous work?” I was not able to give any answer at that moment.

I went home and thought about it. I slept and saw a dream about the new planet. I suddenly woke up. “I will complete my dream in the new planet,” I said. I went to the office and saw many astronauts getting ready to go to the new planet by a rocket. I got ready in the uniform of an astronaut and made plan to go secretly.

And I went searching my own road. I walked for two hours and saw a big village where people were fighting with each other, killing and eating the meat of human. I heard them talking in different languages. When I saw their faces, they were like those of the wild animals. They were shouting without any reason. After some minutes, a big and tall man came riding a strange animal like an elephant. All the people were quiet. When he came down, two people were brought. When I saw their faces, they were of my office. Right in font of me a strange man cut their heads off and ate. My heart started beating faster and faster.

I went to the back side of a house because I would not tolerate to see that happening in front of me. I saw a man crying and I went in front of him. I got a little afraid but also I asked, “Why are you crying?” He replied, “That person killed my brother.” “Don’t cry,” I said, “From today, I’ll be your brother.”

I shared dinner with him. I told, “For tonight, let’s sleep here and tomorrow we will go to the next world which is full of human beings, happiness and kindness.”

We slept for a few hours. After sometime, I suddenly woke up. I thought it was morning but I saw darkness all around. Then I asked him, “Why is the sun not rising up?”

“This is a planet where the sun never rises,” he informed.

“Let’s go from here then. Tomorrow, let’s take the rocket and get out of this hell. We can find a better world.”

When we were walking many people came and got around us. They were the same people and took us to the same village where they used to kill human beings by cutting their heads.

Now it was the turn of my brother and me. I was not afraid of being cut but, my brother was crying. I told, “Don’t cry my brother. One day we have to die anyhow.” After sometime, the same strange man came with a long sword to severe our heads. At first he killed my brother, cutting his head. Two drops of my tears fell down onto the leg of my brother. Thereafter, my turn came and I closed my eyes and thought, ‘God, save me!’

He was as quick as a flash. He took his sword and chopped off my head.

After our death, some one took us in the new planet where we would get love, kindness and happiness. We wished, our country would one day be as beautiful as the lovely heaven above! 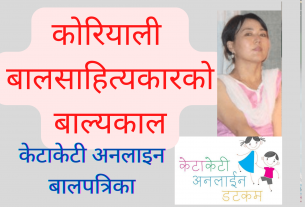